“Use, do not abuse; neither abstinence nor excess ever renders man happy.” — Voltaire

I was always aware of the smoking hazards however; the ongoing debate on whether the anti-smoking ads should be a mandate for Indian movies did push me to investigate further. One of the Hollywood Directors was recently in news for being denied releasing a Hollywood movie in India because he was not in favor to insert anti-tobacco advertisements into smoking scenes. As per Indian law, applicable since October 2, 2008, health warning on smoking scenes is mandatory in films and televisions. But, does it really help?
If you go back in 2000 BC, you will discover that there existed a medicinal plant called Cannabis. It was then used in small amounts as a psychoactive drug for mood upliftment or augmenting the brain cells. It was also used in Ayurveda to cure psychological disorders to some extent. Who knew it then that this blessing in disguise will be a cause of concern in the decades to come.
With approximately 120 million smokers in India, it definitely is an issue that drives attention. According to the World Health Organization (WHO), India comprises of 12% of the smoker’s population across the globe out of which 30% are the adult male smokers and 3-5% are the adult female. Additionally, approximately 900,000 people die every year in India due to smoking. And these stats date back to the year 2009. 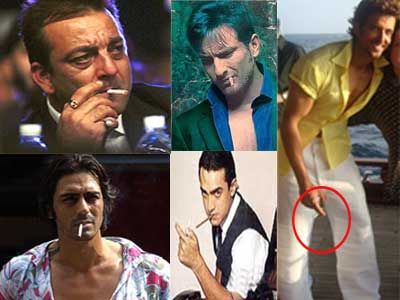 People, especially Indians are known to follow Bollywood trivia and their favorite celebrities’ big time. The majority of janta (public) loves to follow their star blindly whether it is their style, their tone, the latest fashion in the latest movie or even the way they are portrayed in a character. When people go insane in real life, imitating the reel life actor, do they really care if a line of disclaimer in tiny fonts runs across the screen? As a responsibility, the government has taken a good and proactive measure, which is a rare occasion but, who is keeping a count if it is really helping people to keep away from cigarettes. It’s just like a cautionary message on a pack of cigarettes. The message is put straight however, the production cannot be stopped.
On the contrary, as per Reuters there was a campaign run in the U.S. for four months in 2012 in a national TV ad campaign and also featured radio, billboard and digitally. It was not for long duration, but certainly the biggest campaigns ever in the world. It did make difference as one of the post campaigns research revealed, “1.6 million smokers nationwide made an attempt to quit smoking and 220,000 were not smoking at the end of the campaign.” To read the complete report, you can visit: http://www.reuters.com/article/2013/09/09/us-anti-smoking-idUSBRE9880MQ20130909
Not many of us know that tobacco manufacturing companies, especially in India, maintain Corporate Social Responsibility (CSR) initiatives and programs to counter negative attention regarding their noxious business. These companies are often involved in noble and charitable causes just to improve the perception of people and policy makers against their devastating trade. Then there’s also the biggest reason i.e. employment to millions and millions of people.
Now, my question is instead of investing on baseless campaigns of which no one has a record of benefits and proven results, why the Indian government cannot do something to eradicate the root cause? Instead of running disclaimers on big screens, primarily in English, why don’t we run campaigns in the local language across villages and small towns first, on a big scale? After all, the study says, it’s mostly the poor and uneducated that are heavily addicted to tobacco consumption.
The “feel good” policies and regulations can do nothing to improve the pitiful state of nation. With the elections coming up, there will be new campaigns, new promises, new “feel good” policies, but that doesn’t work for a nation like ours. We need to be pragmatic. We need an activist, not a politician. An activist–who is strong and does not succumb to handful of crooked politicians. We need someone, who invests money in the right direction than forcing laws that do not make any difference to the aam janta. Or, even if they do make a difference, who’s evaluating it and keeping us informed? Why not?
Coming back to where I started, these anti-smoking ads really don’t matter to audiences. Whoever has to smoke, will smoke irrespective of whether such lines are displayed or messages prompted on the screen of a big flick. Movies are in a way a reflection of society. More than the directors, it’s the role of the Center to improve the societal conditions. The increasing rates of crime like rapes, thefts, murders, drugs are what the media portrays as an eye-opener. Instead of stopping the media or blaming them for polluting the minds of people, we must first focus on how these things can be prevented or eliminated from the society. Probably, media will never have prevalent issues to portray and will come up with better things for its audience to relate to.